Multiple Versions of Me Become One

I am a strange sort of fellow, especially in the music I like. You see, I like Steve Earle, and Tom Petty, and Del Amitri, and some country (especially alt and outlaw!)... but there's more. I also like The Dogs D'Amour and Social Distortion and The Levellers, who have almost a punk sensibility. But it goes on! I also like Motorhead, and I like Hawkwind with their space rock. And I also like instrumental music like Mike Oldfield, and electronic stuff like The Crystal Method, and Ladytron.

I am not sure who else listens to all those genres and styles with equal love, but I do. And, as a musician, the side effect is I also love creating that range of music.

Up until now, I've kept that separate, with Tommy Grimes III for the guitar / rock / country / blues stuff, and Faol Glas for the instrumental stuff.

But I have grown somewhat tired of that, it's a lot to maintain, and I'd rather be making music than maintaining websites and blogs... so, I have decided my instrumental and electronic will all just go under my own name. If people get confused, or can't fathom how one person can create such vastly different types of music, well, I guess that will have to be too bad!

In terms of being a songwriter, well, I also write melodies, so the instrumental stuff remains valid if you want to assess me as a songwriter - it tells you about what I like and how I write in terms of melodies and harmonies. So going forward, it will all be under just the one name!

So, the piece responsible for that was the draft from this weekend of The Five Sisters - part one of what should be a longer five-part instrumental of varying styles, inspired by the Five Sisters of Kintail, a mountain range in Scotland.

This also came about from wanting to do some guitar-based instrumental pieces, so expect to hear some of those too soon. These will be less synth-heavy than my other instrumentals, keeping the guitar as a main focus.

Windows is always so "helpful" - whenever I create a folder with audio files in it, Windows decides that I want to see "Artist, Album" etc as the file details. For a musician, that's a pain in the arse, as the files are most likely drafts, tests, or even individual audio files for tracks in the DAW.

When I look at those folders, I usually want to know "is this file too large to email?" - I don't need to know who it's by, it's by me, I know that!

Thank goodness then for this article on stopping Windows from doing that kind of malarkey.

This dual Xeon system has always been a bit crappy with latency. It is prone to drop-outs while I am listening / recording (though these don't affect the recording itself; but it is very off-putting while trying to get lost in playing along with your music!)

It reared its head again as an issue when I revisited the instrumental pieces, as they have lots of synths and effects. Even the Focusrite, which addresses the worst of it all, didn't help out here.

I did find LatencyMon which very helpfully gives you some idea on anything that might be causing latency. The test results give the very interesting and I-would-never-have-thought-of-that step of turning off my network adapter while working on particularly heavy songs. Cool.

And the other thing I always have to remember - turn on "Multi-processing" in the Bazille synth, else it just never works!

Posted by Tommy Grimes III at 9:38 PM No comments:

Always a sucker for a sale (when it comes to music software at least), I went and demo'ed and then purchased BIAS FX from Positive Grid. 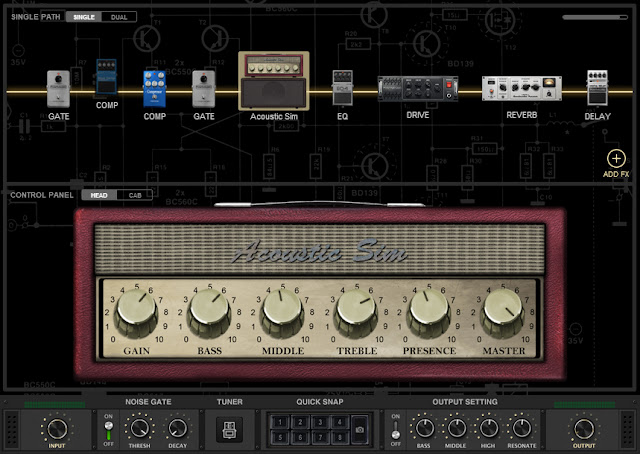 My reasoning would be considered pretty strange I guess - I found I was able to get a "super compressed Strat sound" like I'd been looking for in my other amp sims, and that I really liked the Tele played through (of all things) their Acoustic Sim amp, as seen above.

Oddly, I wasn't taken with BIAS Amp, it didn't do what I needed, mostly because I was after the compressors in BIAS FX which seemed to do the super-compressed sound really well when I chained two different ones together.

As part of recording "The Spirit of Country" I ran into a problem - the Tele has a 9.5" to 14" Compound Radius, and my Kyser capo was not working on the second fret, leaving the guitar out of tune. Sure, could just retune it when I put the capo on, and retune it when I took it off, but I figured there must be an easier solution. There was. 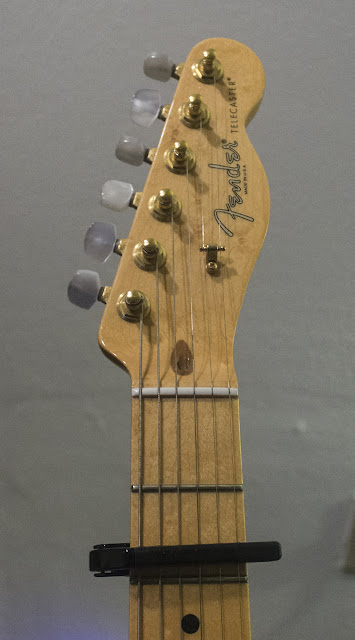 The D'Addario / Planet Waves Tri-Action capo has adjustable tension, and presto I could tweak it so that it worked down here where the neck is fatter. Very happy with it, and can heartily recommend it, and it's price!

Posted by Tommy Grimes III at 8:42 PM No comments: