I am an odd kind of fellow. For one, my rock music side of things is a bit rock, a bit blue, a bit country, a bit folk, a bit celtic, and probably more besides.

As if that wasn't eclectic enough, I also have a love for instrumental and electronic music, which I also create under the name Faol Glas.

This is because I love music, in many of its forms. It stirs me, moves me, and each genre and style does so in a different way. That means I both want to listen to all those styles, but also that I want to create them too.

So, imagine my disgust on reading this:
http://knue.com/clay-walker-outdated-rockers-gone-country/

Here is someone telling other artists that they shouldn't produce country music. I wonder who appointed him overseer? If an aging rocker (or young hip hop artist, or middle aged pop signer, or anyone else) wants to make country music, then they can damn well make it.

If it's no good, well then nobody will buy it - and that is where Clay Walker's power over what other artists choose to make begins and ends, with deciding whether or not to purchase it.

But what, you ask, if it is merely an attempt to cash in and make money? Well first some of the folks cited in that article probably have no need to make money, and second, even if that is their motivation, they are still entitled to it. Don't tell me the country music marketing machine and some "bona fide" country artists aren't just as shallow in their motivation, pursuing the dollar sign into twanging guitar and getting the words"truck" and "beer" into as many lines as possible.

If someone wants to make money, that's all fine and good, whatever their background.

Thing is, it's a mighty long fall from the back of a high horse.
Posted by Tommy Grimes III at 9:31 PM No comments:

BB King passed away today, very sad. I'd post a link to an epic, seminal performance by him, but that was pretty much all of them so choose any you like. Heart and soul were expressed through his music, but you could also see it in him as a person too - something about him just seemed so bright, warm and light.
Posted by Tommy Grimes III at 10:26 AM No comments:

Too Many Verses - plus noise reduction talk

Finished up "Too Many Verses" in rough n ready form, have a listen and download if you like: http://www.tommygrimesiii.com/music/TooManyVerses.mp3

A bit of irony when you listen to the lyrics, as it has been waiting about 7 weeks to finish, but I've had too much work! As ever, it's not really meant for me to sing, but for someone else who likes the song (let me know if that's you!) Personally I think a bit of The Dogs D'Amour crept into the sound of this one! 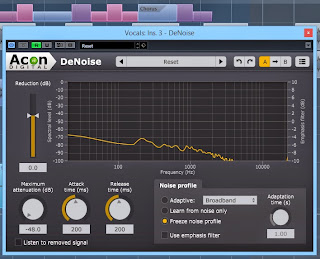 The other part of this blog is about a new addition to the stable of stuff, in this case new noise reduction tools.

Sure, the songs are meant to be drafts, but that's no reason to have lots of hums, buzzes, clicks and more hiding on there to distract someone from the song itself.

The bass is the worst for this, it likes to pick up a lot of buzz from the monitors and PC, though the electric guitar can get the same way and fed through the amp simulators with distortion, they can be noisy in the silences.


The vocals are a problem as well, the PC is a bit of a beast (it does video editing and 3D work too) and so has a fair collection of fans, so it is far from silent, and I don't have a vocal booth of any form.

I have been using ReaFir for that, which was free and pretty good but had one problem - as soon as I added it to any track in Cubase, I got latency - hit a note on the guitar and it was heard a teeny fraction of a second late, but that is enough to throw off the playing!

And sometimes that noise is a pain while playing, distracting, so that was a problem - and although I could get good results from ReaFir, I sometimes got artifacts - enter Acon Digital!

Having looked around at the big expensive noise reduction plugins, I just couldn't justify that kind of price. The Acon Digital Restoration suite was only $99 though, and a test of the demo showed it did not have the latency problems (and if there was some, simply disabling the plugin but leaving it in the chain would resolve it) and it didn't create the same issues with artifacts.

"Too Many Verses" was one of the noisiest tracks I've created, with two electric solo sounds, the electric rhythm, the vocals, and the bass all having their addition to it, so that prompted me to take the plunge. Very glad I did, very impressed with it - easy to use, and good results, and I have many uses for it in some of the video editing work I do too!

Go try it for yourself here!

Posted by Tommy Grimes III at 1:47 PM No comments: